Vancouver, Canada, May 15, 2018 –(PR.com)– GoverMedia Plus Canada Corp. (CSE: MPLS) (FWB: 48G) (WKN: A2JF6W) (“GoverMedia” or the “Company”) is pleased to announce it has reached its expected milestones regarding the roll-out of its internet platform. Following the first marketing and advertisement expenditures for its internet ecosystem, the Company has achieved the following:

– Active users milestone: more than 140,000 total active users registered on the internet platform, having more than doubled from the total active users in February. The Company has set the target of reaching 1 million users in the next 12 months.
– Initial E-Commerce transactions: as a consequence of the achievement of its initial target milestones, the Company has seen an increased user activity on its E-Commerce platform. During the beginning of this year, GoverMedia has recorded the initial transactions of goods and services. User engagement has shown signs of solid growth in the past weeks.
– Marketing team build-up: The Company has recently increased its local Sales & Marketing force by several new key hires. GoverMedia currently counts 9 employees in the Sales and Marketing department. All of the Company’s employees bring extensive sales experience in the local community, as well as a distinguished network of potential customers and partners.
– Chief Financial Officer hire: GoverMedia hired Mr. Arvin Ramos as its CFO. Prior to joining the Corporation, he served as CFO for several publicly traded companies operating in technology and banking for 20 years.
– Introduction of the GoverMedia CRM platform: The Company has built an infrastructure to support entrepreneurs in their daily business operations. Through the GoverMedia platform, businesses can access the GM+ CRM, in order to improve customer interaction, optimize marketing budgets, increase sales and automate their business processes. The Company has incorporated as well big data algorithms to process large sets of data in real time, efficiently analysing the results.
– Launch of Ambassador Program: GoverMedia will launch its Ambassador Program where a number of the Company’s online supporters would actively promote the GoverMedia brand in specific territories. A compensation and bonus scheme will be put in place for the Company’s Ambassadors.

Based upon the achievement of these milestones, the Company will rapidly implement its commercialization strategy in the marketplace. The pricing policy and business model will be announced and detailed in a following news release.

During the past six months, the Company’s efforts were oriented towards constant improvement and innovation of the internet platform, exploration of new development and growth opportunities, as well as execution of the commercialization plans. The existing capabilities of GoverMedia’s platform offer many possibilities, increasing the range of commercial applications. GoverMedia is constantly looking for growth opportunities while pursuing the initial strategic expansion plan.

The CEO Roland J. Bopp commented, “Based on the rapidly growing e-commerce marketplace in the Russian speaking countries, a fully functional e-commerce platform and an internationally experienced technology, finance and operational team in place to execute the business strategy, GoverMedia Plus Canada Corp. is poised to thrive within the Russian speaking e-commerce market and create shareholder value of its investors.”

About GoverMedia Plus Canada Corp.
GoverMedia Plus Canada Corp. is a Canadian holding company with a fully owned Russian technology subsidiary. GoverMedia has developed a fully operational state of the art internet platform offering all-inclusive online services such as, e-commerce, social media, multimedia, corporate auctions, corporate database, messaging platform and crowdfunding services. We believe the GoverMedia platform is the first and only internet platform offering such a wide range of online services accessible via only one account. The Company’s management and advisors have extensive expertise in the Telecommunications, High-Technology, Corporate Development and Finance fields. www.gm.plus and www.govermedia.plus.

Cautionary Note Regarding Forward-Looking Statements
The statements made in this press release may contain certain forward-looking statements concerning potential developments affecting the business, prospects, financial condition and other aspects of GoverMedia. The words "will", "may", "anticipate", "intend", "plan" and similar words and expressions are used to identify forward-looking information. These statements include that the Company will resume trading on the CSE. The actual results of the specific items described in this release, and the Company's operations generally, may differ materially from what is projected in such forward-looking statements. Although such statements are based upon the best judgments of GoverMedia's management as of the date of this release, significant deviations in magnitude, timing and other factors may result from business risks and uncertainties including, without limitation, GoverMedia's dependence on third parties, general market and economic conditions, technical factors, the availability of outside capital, receipt of revenues and other factors, many of which are beyond the control of GoverMedia. GoverMedia disclaims any obligation to update information contained in any forward-looking statement unless required by applicable securities laws. 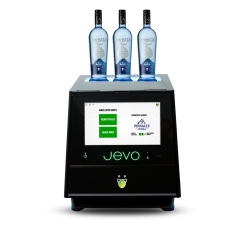