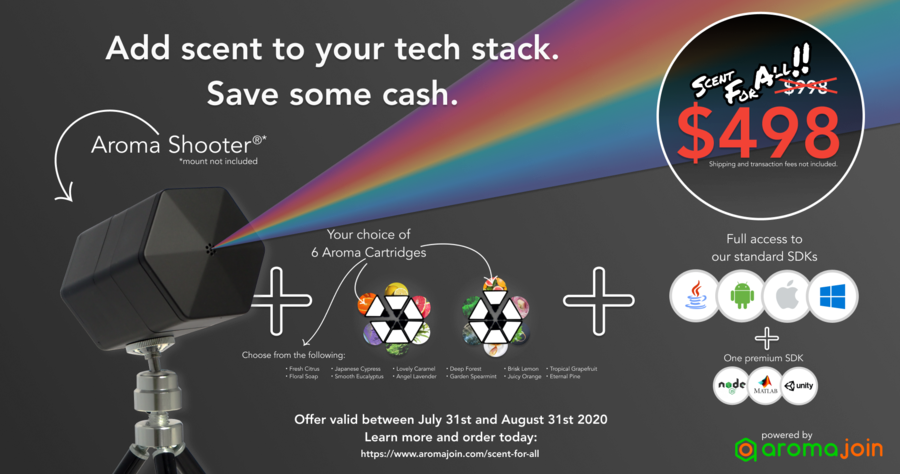 Through August, Japanese scent startup Aromajoin is holding a sale to celebrate the launch of its matte black Aroma Shooter, a new version of the company’s flagship product. The Aroma Shooter is primarily a tool for the retail and entertainment.

KYOTO, JAPAN, July 31, 2020 /24-7PressRelease/ — Through the month of August, Japanese digital scent startup Aromajoin will open sales of its flagship scent delivery system, the Aroma Shooter, to the general public. Primarily a tool of the retail, fragrance, and entertainment industries, the Aroma Shooter will, for now, be available for anyone in the world to purchase and use freely. And, for the first time, the Aroma Shooter will be produced in a matte black finish.

The Aroma Shooter is a 6-chamber aroma emitter that completely abandons liquid media (no vapor, nor mist, nor steam). Based on Aromajoin’s proprietary solid-state fragrance material, the device simply transports scented air on command, making it nearly impossible for odors to mix together unintentionally, even as scents change at high speeds. The Aroma Shooter gives creative people the means to activate and transition discrete (or blended) scents as smoothly as visual content on a screen or sound through a speaker.

The announcement to release the Aroma Shooter publicly comes with a dramatic price reduction. Scent For All packs will be available for USD $498 (before shipping and other relevant fees) through August. These packs include a matte black Aroma Shooter, buyer’s choice of six (6) starter cartridges from a pre-set list of 12, and a license to one of Aromajoin’s premium software development kits (SDK).

Developers and makers who buy an Aroma Shooter during the Scent For All campaign will be rewarded for publishing Aroma Shooter-compatible apps to Apple’s App Store or Google Play. Aromajoin will grant each of these developers a ¥5,000 (USD ~$50) Amazon eGift card as well as full access to Aromajoin’s premium software tools.

Starting July 31st, makers, developers, and fragrance fanatics may visit https://aromajoin.com/scent-for-all to purchase the Aroma Shooter ‘Scent For All’ pack. Prior to the start date, interested parties may subscribe to Aromajoin’s mailing list for notifications about the campaign.