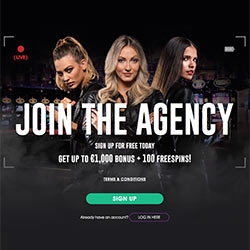 London, United Kingdom, April 27, 2018 –(PR.com)– On Friday the 27th of August, the brand new online casino website, Lets Bet, is released. The site is managed by Michael Pedersen, a former NetEnt manager, and his Scandinavian team. By heavy investments to create an outstanding product, Lets Bet aspire to step into the role as one of the leading new casinos 2018.

Players visiting Lets Bet are met by a highly intuititive, user friendly and interactive site. The huge difference with Lets Bet compared to other new casinos is the social interaction given by the world’s first talk show in the online casino market. From the comfort of the casino players home, it’s possible to meet and discuss with other players. Every day between 6 PM and 1 AM, three agents are there to entertain players. The talk show is shown in the top right hand corner of the page when players are logged in, which can be enlarged or reduced. It’s possible to engage and talk to the hostesses who attend the evening talk show. Three agents, like the characters in the popular American television series "Charlie's Angels," give out missions to be finalized. For example, a mission could be to play Starburst, or any other games from NetEnt or Microgaming. After a completed mission, rewards are issued, which later can be used as free spins. In total, there are about 20 game developers on Lets Bet, including Iron Dog Studios, Booming Games and Quickspin. Several Swedish game manufacturers are also available, such as Elk Studios, NetEnt, NYX Gaming, Thunderkick and Yggdrasil.

The content in Lets Bet's live streaming will change on a daily basis. Since almost everything is in real time, players are given the opportunity to influence what is happening and which topics are being discussed. Some common topics from the start may include popular and new games coming out, big winnings and jackpots or how to win at online slots. Michael Pedersen, CEO of Lets Bet, explains the purpose of the live streaming as follows: "The goal of live streaming is to double the entertainment and create a lively, vibrant and social atmosphere similar to that found at land-based casinos." NewCasinos.com is impressed by the latest site and has given Lets Bet a high score in the independent review found at New Casinos.