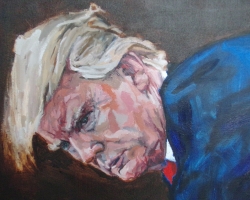 Seattle, WA, May 03, 2018 –(PR.com)– Pictures of a work of art on display at the online gallery Sea See Gallery in Seattle are sparking controversy on social media. The painting, titled, “Spring-Time Romance,” has been shocking audiences with its very graphic, disturbing, bitter take on the politics of the day with its two leading superpower idols Donald Trump and Vladimir Putin. Created by cutting-edge Seattle street artist AnonZ, the 7-by-9 foot painting has been described as a "contentious and interesting piece" that offends some but provokes thought in others.

The painting has been deemed more than just offensive in the U.S. – the Seattle based gallery says AnonZ has been uneasy with its public release due to the country's recent political division. The artist insists, however, that while the larger than life acrylic painting is sparking controversy, he is moving forward with the display of the piece. In a statement to the gallery, AnonZ expressed, “knowing that an artist may be deliberately evoking an emotional response, it pays to take a moment and question our immediate reactions to the painting.” AnonZ keeps us guessing, looking, and analyzing all the tactics that “Spring-Time Romance” presents on canvas and emphasizes the notion that, like the characters present on the painting, not everything is what it seems.

In spite of the paintings controversy, Sea See Gallery has continued to accept viewings and is placing the artwork on sale at their local gallery in Seattle, WA. According to the gallery director, Michael Stern, “the painting has generated more than the usual buzz, given the recent geopolitical tension between America and Russia, along with the fallout from the Russian collusion scandal.” The director continued, “AnonZ has created an epic artistic painting of political power overblown in its scope of characters that overwhelms the viewer with vivid colors, texture, and a demur worldwide background of things to come. The viewer is taken on a visual tour of passion, egos, failures, and a fight of the highest order for world dominance.” The artists physical multi-layering of acrylic paints is stunning on Trump's face, layers of threats, and stories told and untold are suggestive in the folds of each tone. Putin's stunning lack of life adorned on canvas looks mortician-like, but stealth in its complexity of glazes.

After the art gallery shared an image of the painting on social media, the art gallery website had over 300,000 views. The painting is now up for sale. To learn more about the artist and see the full image, please visit SeaSeeGallery.com.

Turns Out Crackheads Can be Redeemed and This Man is Proof