When Kirby passed on in 2001, the trustees of his estate had been tasked with sorting through his vast archives. Amongst the papers, receipts and correspondences with famous authors, was a hidden gem.

Amy Anderson, the executive director of the Josh Kirby estate, says: “We discovered a hand typed manuscript, along with sketches and doodles, telling the whimsical and adorable tale of a time traveling mouse, named Marmaduke. And now, sixteen years later, it's becoming a reality."

To bring this long, lost creation to the world, the Josh Kirby Estate assembled a dream team of sorts, by inviting Discworld cartoonist, Ray Friesen and Discworld co-author, and voiceover artist, Stephen Briggs, to lend their talent to the project.

Ray Friesen said: "This book is an absolute thrill to illustrate – so much time travel variety! I am indebted to the Josh Kirby estate for the trust they have placed in me to finalize the great painter’s unfinished symphony.”

Stephen Briggs adds: “I’m delighted to be joining with the estate of Josh Kirby in this project."

With the dream team in place, the estate made the decision to launch a Kickstarter campaign so that everyone could be a part of this once in a lifetime opportunity.

Rob Liano, Marketing Director for the estate, said "We decided to share the book with the world in the best way possible, by offering everyone the opportunity join in on the creation of the project, through a Kickstarter campaign. For the estate, it's always been about the fans, and now they can be a part of Josh’s legacy by partnering with us to bring the book to fruition.”

It’s a formula that’s working because the campaign is 90% funded with just about three weeks to go and the estate is confident they will reach their stretch goal which would offer the audio book to every single person who pledges at any level. With exclusive rewards and limited edition items, there’s something for everyone.

The project is a continuation of Josh Kirby's prolific career, the artist you know and love or perhaps the one you don’t realize how well you know his work. 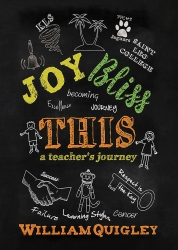 IndieGo Publishing Announces the Release of “Joy Bliss This: A Teacher’s Journey,” by William Quigley